Hundreds of dogs are found abandoned every day. There are government and private animal rescue organizations that help rescue abandoned dogs. Still, the hard truth is that there’s nowhere nearly enough to save all abandoned dogs in the country.

Some dogs end up being strays, while others are chained up somewhere and left to die. It’s heartbreaking to see these creatures get abandoned, and they surely deserve a better life. However, some of the lucky ones do get rescued by amazing people, and rescuers make sure that they are adopted by a loving family who will never abandon them again.

One dog was found chained next to an abandoned building. When the rescuers found the dog, she didn’t look healthy. In fact, the rescuers were shocked that the dog’s still alive. One of the rescuers even wondered if the dog still has a chance to live after they rescue her.

The heavy chains around the dog’s neck were impossible to take off without the proper tools. So, the rescuers resorted to kicking on the wooden door to free the other end of the chain and let them finally rescue the suffering animal. The rescuers were so emotional during the rescue, and they couldn’t believe that a person can something so terrible to a helpless and beautiful animal.

The rescuers rushed the dog to an animal hospital where they had her treated for her injuries. One of the dog’s eyes had a terrible injury that an eye specialist was needed to take the eye out. A few weeks after the rescue, the dog, who was named Frances, made a full recovery.

Although she was blind on one eye, Frances was having an amazing time with the animal hospital staff. She started playing with everyone and giving everyone puppy kisses. The rescuers were also amazed at how loving Frances is despite going through pain and suffering caused by a human.

Frances was fostered by one of her rescuers named Jan Stenger. She thought that it was going to be temporary, but because of Frances’s loving nature, Jan completely fell in love and decided to let her stay in her home permanently.

The three female rescuers, Carol Daniello, Amy Roman, and Jan Stenger, are heroes for rescuing Frances. They all have such a big heart, and they continue making a difference for the life of abandoned and stray dogs by saving them and finding a good home for them. Here’s a link of the heartwarming video of how these three women rescued Frances and how they transformed her to become a loving dog that’s able to trust humans again. Just click on the link below the screenshots to watch the video. 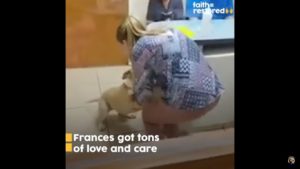 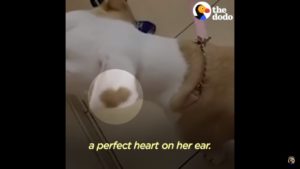 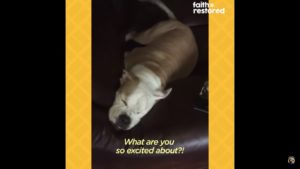 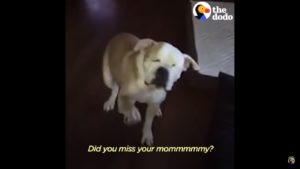 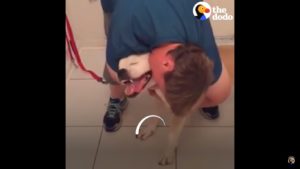